Jointly Building the Belt and Road: Timely, Fruitful, and Substantial --Interpreting the Important Speech of General Secretary Xi Jinping at

On August 27, Xi Jinping, General Secretary of the CPC Central Committee, president of the state and chairman of the Central military Commission, attended the symposium  marking the fifth anniversary of the Belt and Road Initiative and delivered an important speech. He summed up the work of jointly building Belt and Road over the past five years, analyzed current situation of the construction of "Belt and Road", and made plans for the next step in promoting the construction of "Belt and Road." In the current complex international and domestic situations, it is of great significance to study and understand the spirit of General Secretary Xi Jinping's speech.

General Secretary Xi Jinping's overall assessment of the Belt and Road initiative over the past five years is that it has moved from concept to action and has made significant progress. From three aspects， he illustrated the positive changes brought about by the joint construction of "Belt and Road" to the development of China and the World， as well as the progress made so far: The first is to build a new pattern for China's reform and opening up; The second is to provide a new impetus for the development of the world economy; Third, it has made new contributions to the global governance institution.

Under the framework of "Belt and Road" international cooperation, China is actively promoting international cooperation in infrastructure construction and international production capacity cooperation, building a better interconnection network between China and the world, and vigorously promoting the industrialization process of developing countries. This is not only conducive to promoting China's economic restructuring, facilitating the further implementation of supply-side structural reforms, but also conducive to promoting the development of the western and inland areas of China; and to promoting the process of RMB internationalization. It is helpful to promote the high quality development of China's economy. At the same time, in the process of building "Belt and Road", China has been continually increasing the number and quality of constructing Pilot Free Trade Zones; The markets hasve been increasingly opened up to the world, import tariffs have been lowered by a large margin, trade and investment facilitation has been vigorously promoted, and more foreign economic and trade cooperation zones have been established in relevant countries.

Over the past five years since the jointly building of Belt and Road, China has invested a certain amount of funds in countries along the road and involved; mainly engaged in infrastructure construction and capacity cooperation. China has constructed highways, railways, bridges, ports, power stations in many countries; and in some countries it has built steel mills, cement plants, car factories, refineries, food processing plants, clothing factories. On the one hand, it creates preconditions for the economic development of these countries; on the other hand, it also directly drives the industrial development of these countries and promotes the industrialization process of these countries.

The propel of joint construction of "Belt and Road" has enhanced mutual political trust. On the premise and on the basis of which, the realization of mutual economic integration, coupled with the mutual exchange of civilizations, has played a positive role in promoting global prosperity, maintaining world peace and strengthening global governance. China has advocated the BRICS New Development Bank and the AIIB, which has played a significant role in improving global financial governance. Meanwhile, China's  sharing of experience in poverty reduction with the vast developing countries in the world is conducive to the promotion of new progress in global poverty alleviation; China has increased the number of personnel participated in international peacekeeping operations, making important contributions to world peace. 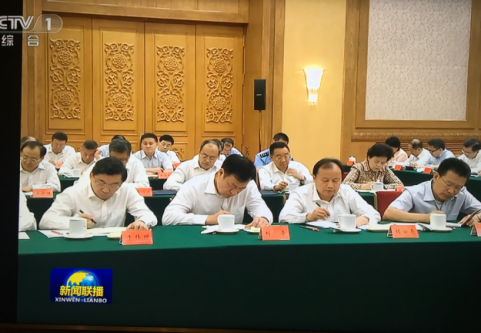 General Secretary Xi Jinping's basic judgment on the current macro situation of promoting the construction of "Belt and Road" is: we are now in a period of great development, great change, and great readjustment. On the one hand, there is an increase in instability and uncertainty. On the other hand, there are also great historic opportunities, such as the arrival of the fourth Industrial Revolution, the emergence of innovation and development as a global trend of development, the industrialization of developing countries, the acceleration of the urbanization process, and so on. In such a historical period, the Belt and Road Initiative emerges as the times require. Many countries, especially developing countries, have seen the positive impact it has brought or will bring to the world,, so they have responded to and participated in it very positively.

We are facing an era of unprecedented changes in a century, so the situation is very complex. In such a complex environment, we must choose to do something positive for future development. Through the construction of "Belt and Road", the world will be better connected, trade and investment will be more facilitated, economic elements can flow more freely, transaction costs will be reduced, and economic efficiency will be improved, which will bring prosperity and development to the whole world. "Belt and Road" is also conducive to the promotion of new and more inclusive development of globalization and the promotion of innovative development. China's practice in the digital economy has proved that developing countries will have the opportunity and the possibility to utilize the late-developing advantage to realize a leapfrog development.

However, to promote the construction of belt and road, we still need the optimum timing. We should advance the Initiative neither too early while the conditions are immature; nor too late that we may miss the opportunity. From the five years of practice, the current timing is relatively suitable, which requires we to push forward Belt and Road  energetically and steadily. As a matter of fact, under current circumstances of  anti-globalization and the disturbance in the multilateral trade system, "belt and road" has actually become a new platform for promoting the construction of the multilateral trade system in the world. This is not only China's needs, but also the needs of the world.

First, he emphasizes the fundamental nature of the joint construction of Belt and Road. "Jointly building Belt and Road is an initiative for economic cooperation, instead of a geopolitical alliance or military league, and it is an open and inclusive process rather than an exclusive bloc or ‘China club’.  It does not differentiate countries by ideology nor play the zero-sum game. As long as countries are willing to join, they are welcome. The foundation of economic cooperation is mutual trust, and the purpose is to promote mutual benefit, to realize mutual learning between civilizations, and finally to build a community with a shared future for mankind. It is necessary for General Secretary Xi Jinping to stress this point now, because many misunderstandings now lie in the confusion of the fundamental nature of Belt and Road. He thinks that China's promotion of "Belt and Road" is not to expand its sphere of influence, not to expand its influence in the region and the world, not to change the rules of the world, not to establish a new political alliance in the world, and so on.  The focus of the joint construction of "Belt and Road" is on infrastructure construction and capacity cooperation, and has nothing to do with political and military alliances.

Second, General Secretary Xi Jinping pointed out that several relationships should be hanlded well at the new stage of advancement, including the relationship between doing one’s best and acting within one’s capability, the relationship between overall advance and key breakthrough, and so on; and special attention should be paid to risk prevention andregulation on enterprise investment and operating behaviors. General Secretary Xi Jinping has also given detailed and targeted advice on how to select projects for investment.

Finally, General Secretary Xi Jinping pointed out that it is necessary to strengthen the Party's leadership over the joint construction of Belt and Road, and improve comprehensive arrangement and coordination. A solid and well-built "belt and Road"  can provide a powerful support for realizing the two centenary goals, achieving the Chinese dream of the greater rejuvenation of the Chinese nation,and building a  community of shared future for mankind.