SINCE President Xi Jinping first proposed the Belt and Road Initiative in 2013, more than 100 countries and international organizations have shown keen interest in the program. Around 50 countries have signed cooperative agreements (or MOU), more than 20 have carried out productivity cooperation, and a host of major projects is in progress.

This favorable, wide-ranging feedback is attributable to the open-ended cooperative essence of the new initiative; it adopts neither preset conditions nor any discriminatory mechanism. In accordance with the fundamental principles of win-win cooperation and mutual benefit, any country may make full use of the platform according to its native endowments of development resources.

The Belt and Road Initiative is a transnational, multi-functional mechanism. First, it aims to promote mutual development among countries along the Silk Road Economic Belt and 21st-Century Maritime Silk Road by meeting shared challenges and resolving problems through negotiations. 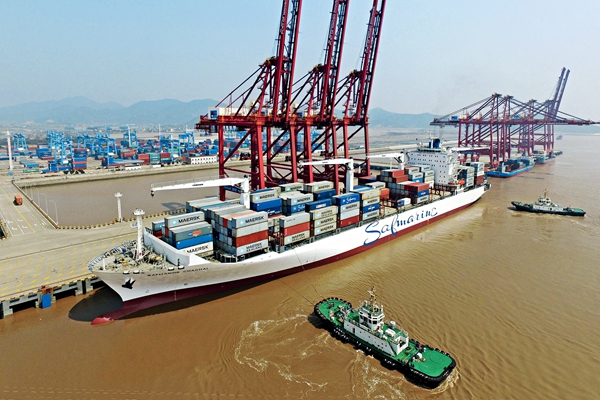 Rajat M. Nag, former managing director general of the Asia Development Bank, referred to the Belt and Road Initiative in a speech at the Emerging Market Institute of Beijing Normal University on April 5; he regarded the initiative as a form of open regionalism.

In this sense, the initiative is directly conductive to regional cooperation, especially with regard to the economy. As its initiator, China has no intention to establish a sphere of influence. Rather, the country, along with others along the routes, expects to improve global governance in a way that will give developing countries more of a say, and thus benefit more people.

Second, the initiative is a pragmatic construction and implementation mechanism. Instead of employing empty rhetoric, it is taking concrete action towards building consensus and pushing forward the implementation of proposals. As President Xi Jinping stated, the Belt and Road Initiative encompasses at least five aspects – policy coordination, facility connectivity, unimpeded trade, financial integration, and people-to-people bonds.

Specifically, the five aspects fall under two categories. Policy coordination and people-to-people bonds relate to so-called software building – the focus of the former on inter-government exchange and cooperation, and that of the latter on exchanges among peoples. The second category, hardware building, advocates infrastructure and interconnectivity, trade, and financial cooperation. 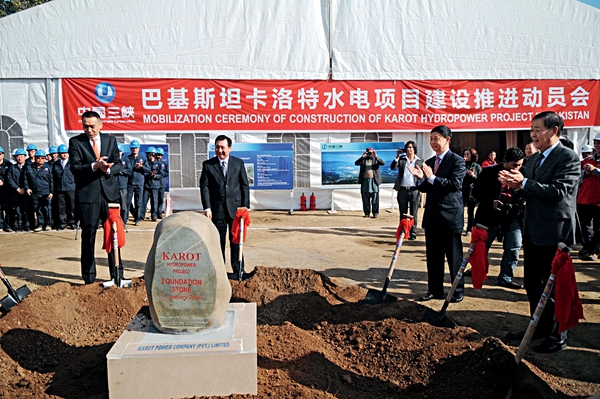 The mobilization ceremony of construction of the Karot Hydropower Project, invested by the Silk Road Fund, in Pakistan on January 10, 2016.

On the basis of developing both software and hardware, the Belt and Road Initiative makes it possible for related countries to construct and implement various projects so as to achieve mutual benefits.

Over the past three years, the Belt and Road Initiative has proved itself a major player in regional cooperation, particularly economic development. It has achieved many positive outcomes in such fields as infrastructure, trade and investment, financial cooperation, and collaboration in productivity.

Infrastructure is a key aspect of the initiative. Several transnational railways are under construction, including the one linking China and Mongolia, one linking China and Laos, and the Moscow-Kazan and Jakarta-Bandung high-speed railways. Several block trains have been running between China and European countries. The expressway linking Karachi and Lahore, Gwadar Port in Pakistan, and Kyaukpyu Port in Myanmar is also underway.

The Belt and Road Initiative infrastructure projects are colossal in both quantity and scale. As most transcend the national boundary they entail close cooperation between China and the relevant countries. Thus far, the common practice is for China to invest the bulk while related countries buy shares. The projects employ local workers, so promoting the job market. Those completed and in operation are thriving.

The initiative also promotes trade. National Bureau of Statistics data show that in 2016 the total volume of Chinese commodity trade experienced a dip, year-on-year, of 0.9 percent. However, the commodity import-export volume with countries along the Belt and Road totaled US $1 trillion, – a 0.5 percent rise – accounting for 25.7 percent of China’s yearly cargo trade volume in 2016. 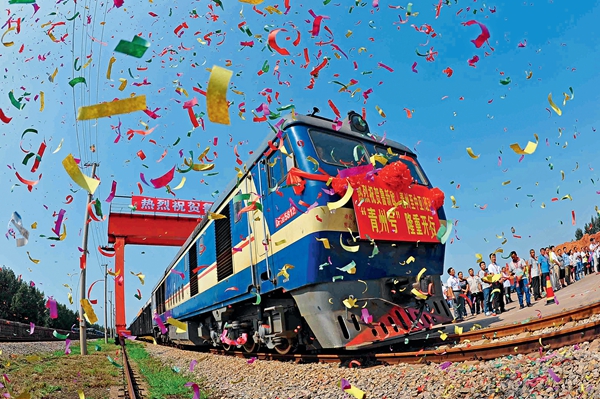 A block train about to set out from Weifang, Shandong Province, to Central Asia on August 28, 2015.

The initiative has also promoted investment. Chinese Ministry of Commerce statistics show that China’s FDI (excluding banks, bonds, insurance) to countries along the Belt and Road reached US $14.5 billion in 2016, while the reverse flow hit US $7.1 billion. China’s net FDI (US $7.4 billion) in the region represents a 17.5 percent hike over the previous year. Chinese enterprises have moreover established 56 trade and economic cooperation zones in more than 20 countries along the routes, with an aggregated investment of US $20 billion, generating revenues for these nations of more than US $1 billion, as well as about 200,000 jobs.

The prospects for financial cooperation are broad. Bank savings in countries along the Belt and Road are relatively low and are incapable of supporting the necessary resource exploitation and infrastructure development. China, by contrast, has abundant savings and funds which can be channeled into these countries. Chinese banks have so far opened an estimated 100 branches and offices in more than 20 countries along the Belt and Road. Chinese private enterprises have also invested in the banking sectors of Central and West Asian countries, having successfully merged with private banks while also opening new ones.

The region moreover accounts for more than 50 percent of the world’s total energy consumption, by virtue of big consumers like China, India, and Russia. Specifically, it consumes more than 70 percent of all coal, about 50 percent of gas, and about 40 percent of petroleum.

However there is an imbalance between production and consumption, which varies according to country. For example, the energy demands of India and China greatly exceed their respective turnout, while the output of other countries far surpasses demand. The situation thus calls for cooperation among these countries. From 2013 to 2016 China signed dozens of energy cooperation projects with countries along the Belt and Road, and imported the bulk of crude oil, so generating for exporters funds for development. Trade and cooperation between China and these countries in petroleum products has also been promoted.

Judging from actual results, the Belt and Road has had positive impact on global economic governance. Its remarkable effects are apparent in two respects.

Its aim to propel construction of the Belt and Road and resolve capital shortfalls, the Asian Infrastructure Investment Bank (AIIB), initially proposed by China, officially opened on January 16, 2016. Its multilateral financing institution now has 70 full members (including countries and economic entities). Its main purpose is to provide regions in Asia and along the Belt and Road with loans that will enable them to improve infrastructure and the productive forces of energy and transportation, among others. The AIIB has so far provided US $2 billion in loans for infrastructure construction in countries like Pakistan, Bangladesh, Tajikistan, Indonesia, Myanmar, Azerbaijan, and Oman.

Practice has proven that the AIIB constitutes an effective supplement to the World Bank, and in particular to the Asian Development Bank, as regards investment, finance and international aid to the Asia-Pacific region and countries along the Belt and Road. In line with the demands of the new era, it also proposes adjustments and improvements to the global governance structure. From another perspective, it explores ways of reforming and perfecting the management structure and improving the efficiency of both International Monetary Fund and the World Bank.

In addition to the AIIB, the China-led Silk Road Fund directly supports construction of the Belt and Road by giving financial support for infrastructure, resource exploitation, and industrial and financial cooperation so as to promote mutual development and prosperity in areas along the Belt and Road. China plans to contribute a total of US $40 billion, having carried out its first US $10 billion capital injection in December 2014, when the fund was officially established. This first investment was in building the Karot Hydropower Station in Pakistan, to support construction of the China-Pakistan economic corridor, one of six such corridors built under the auspices of the Belt and Road Initiative.

Moreover, China hopes to deepen South-South cooperation through the construction of the Belt and Road, and promote joint development amongst developing countries. During the UN Sustainable Development Summit on September 26, 2015, Chinese President Xi Jinping announced five plans whereby developing countries can achieve the goals of the post-2015 development agenda. Specifically, China would do its utmost to increase investment in the least developed countries (LDCs) to US $12 billion by 2030. China would also exempt the outstanding intergovernmental interest-free loans owed by relevant LDCs, landlocked developing countries, and small island developing countries which fell due at the end of 2015. China would furthermore establish an international development knowledge center to facilitate studies and exchanges with respect to development theories and practices suited to each country’s respective national conditions.

Reducing poverty is a main objective of South-South cooperation. China has lifted almost 500 million people out of poverty during the past 30 years, and will eliminate absolute poverty nationwide by 2020. The country has indeed accumulated rich poverty alleviation experience for the world. Construction of the Belt and Road will generate more revenue and job opportunities for the countries concerned, so helping poor countries to rapidly eradicate poverty. This is another notable contribution to the improvement of global economic governance.

In conclusion, the Belt and Road is a brand-new, fundamental international platform and public good which will enhance regional economic cooperation and development, and also improve global economic governance and development.

HU BILIANG is dean of the Emerging Markets Institute at Beijing Normal University.