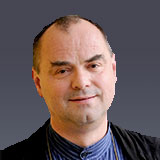 a German economist and sinologist. He is the professor of Evolutionary economics and Permanent Fellow at the Max Weber Centre for Advanced Cultural and Social Studies, Erfurt University, Germany. In 2008, he moved to Frankfurt School of Finance and Management and established the East West Centre for Business Studies and Cultural Science, combined with a Master Program in International Business, as a successor organization of the school.

Herrmann-Pillath contributed widely to the cross-disciplinary foundations of economics, with applications in empirical research and policy design, especially in research on the Chinese economy and international trade policy. His essential philosophical resources are Hegel and Peirce. In the field of evolutionary and ecological economics, he proposes a theory of economic growth that takes the concepts of energy and information as fundamental building blocks. He elaborates on a naturalistic theory of institutions, taking money as a central application, which combines modern neuroeconomics and behavioural economics with Masahiko Aoki’s theory of institutions.

He has published more than 10 books and more than 250 academic papers, and has won the Berlin-Brandenburg Academy Award; Julius Reuter Innovation Award, Ludwig Wilhelm Erhard Finance and Economics Award, China National Book Award and other awards.