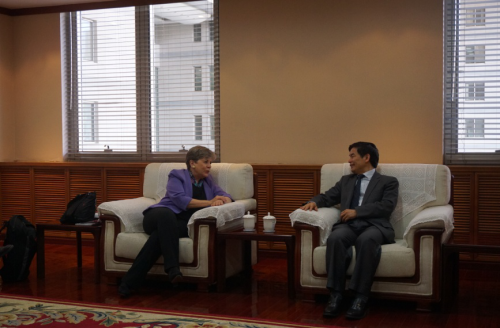 President Dong extended a warm welcome to Ms. Bárcena and her party. Then he introduced the preponderant academic fields of Beijing Normal University and its cooperation with various bureau of the United Nations. Ms. Bárcena expressed strong agreement with Chinese President Xi Jinping's keynote speech at the opening ceremony of the "Belt and Road" Forum, saying it showed the world that China is willing to build and share prosperity with the rest of the world. And hope to further advance the cooperation plan with the university in the future. 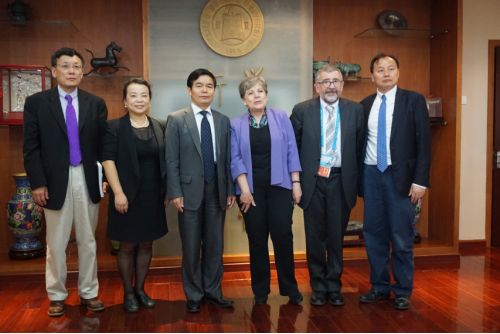 Dean Professor Hu Biliang introduced the recent research achievements in the field of Belt and Road to Ms.Bárcena, and put forward some concrete cooperation plans on promoting scholar-student exchanges, scientific research cooperation, etc. He further listed some possible cooperation fields such as, sending students from Beijing Normal University to Latin America periodically, development of China-Latin American academic cooperation programs, and the establishment of joint research center. Ms Bárcena also invited Dean Professor Hu Biliang to give occasional economic and diplomatic speeches to promote the "Belt and Road" construction.Dean Professor Hu Biliang believes that as a professional think-tank organization that focused on Emerging Markets, and "Belt and Road" research; The cooperation between the Emerging Markets Institute of Beijing Normal University and the UN Economic Commission for Latin America is of great significance and promising to promote the construction of Belt And Road, which is considered as having a broad prospect in future. 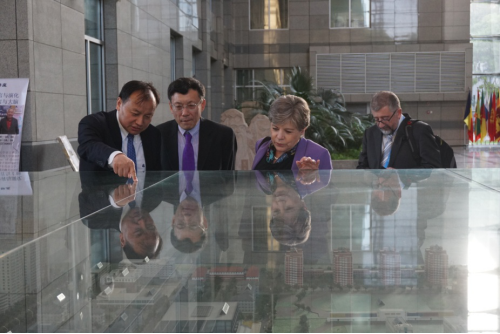 After the talks, Dean Professor Hu Biliang and Associate Dean Pan Qingzhong led Ms. Bárcena, Executive Secretary of ECLAC to visit Beijing Normal University. Dean Professor Hu introduced the geographical distribution of the campus in detail; and discussed The growth of the younger generation and the post-graduation employment condition for students.