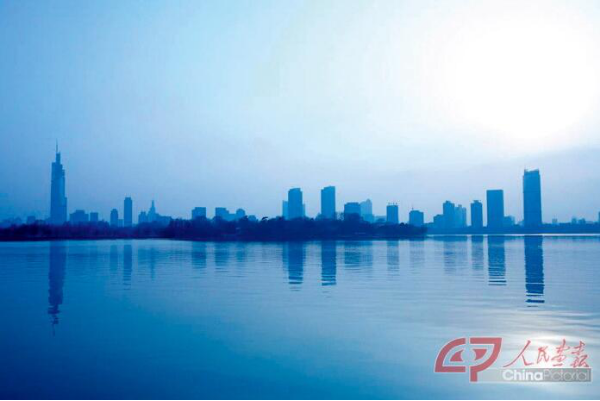 There is more to Nanjing than the memorial to the victims of the monstrous Japanese massacre of at least 300,000 people between December 1937 and January 1938. And, there's more to China's southeastern Jiangsu Province than Nanjing. So I discovered in the course of a journey extending to five days from June 13 to 17, which took me in a bullet train (yet to make its debut in India) from Beijing to Nanjing, then Nanjing to Kunshan, and, Kunshan to the water town of Zhouzhuang, before heading back to Beijing again in a bullet train.

The eye-opening journey to Jiangsu was made possible thanks to Beijing Normal University (BNU). It has an enviable International MBA Program aimed at talent from developing countries. This one-year English-medium course attracts not only conventional students seeking higher professional education but also scholars, officials, diplomats, entrepreneurs and others employed in the private and public sectors. And, they come from diverse countries in Asia, Africa and South America.

I was invited to join BNU's 34 IMBA scholars from 21 developing countries on the Jiangsu Field Trip. The objective was not only to expose and educate the IMBA candidates on facets of China's economy and economic development, but also to inspire them with examples and experiences; and, encourage them to recognize their potential for taking the first step towards setting up in business when they leave the portals of academia.

The fact that five students from as many countries in three continents have decided to set up a transnational enterprise is an excellent example of the practical impact of the IMBA course. For them, too, Jiangsu, was a highly instructive journey.

Although I have travelled in China's high-speed trains in recent years, I still get excited when I have the chance to travel by these bullet trains. That may well be because there is no bullet train in India, and when in India, on average, I travel about 5,000 kilometers by train every month. The Japanese are working on a bullet train between Delhi and Varanasi and Ahmedabad and Mumbai, while the Chinese have their eye on a bullet train between Delhi and Chennai. And, it may be quite some time before these trains are a reality. Even when they become a reality, they may remain a dream for millions who may not be able to cough up the fare for travelling in these.

Thus, every time I travel in a Chinese bullet train – like, for instance, covering nearly 1,200 kilometers in a little over four hours from Beijing to Nanjing – I dream of the day when I would be able to cover the 2,200 kilometers from Delhi to Chennai in eight hours or so, instead of the 30 hours, at least, which it takes me now. The dream ended when I alighted from the train in Nanjing, for back in India, this will remain a dream, at least for some more years.

Nanjing brings me awake in ways I never expected from what I have read or seen of the place in the media. The bustling capital of Jiangsu Province – with its many glass-and-concrete residential and commercial high-rises, wide roads, modern metro,efficient public transport of buses and taxis, heavy traffic, plethora of malls and supermarkets, busy thoroughfares, and abundant green – seems no less than a metropolis. Spread over 6,600 square kilometers, it has a permanent population of 8.23 million, and a floating population of 3-4 million. A comprehensive hub city, located at the intersection of the Yangtze River Golden Waterway and Beijing-Shanghai Railway, its GDP has been steadily rising. In 2015, Jiangsu's GDP was US$150 billion and per capita GDP was US$ 18,000.

Nanjing is looking forward to grasping opportunities and executing strategies that would propel its development even faster and in more and new dimensions and directions. These were spelled out in a presentation made by the Nanjing Municipal Bureau of Commerce at the Nanjing Economic Development Seminar for the visiting BMU scholars. Among the strategies driving Nanjing's transformation are the Belt and Road Initiative, Yangtze River Economic Belt, Southern Jiangsu Modernization Construction Zone, Southern Jiangsu Independent Innovation Demonstration Area, and Jiangbei New Area.

In his opening remarks at the seminar, Prof. Biliang Hu, Dean of BNU's Emerging Markets Institute, pointed out that Nanjing was known for infrastructure, innovations, technology and industrial parks.

Today, Nanjing is going global in a big way with overseas investments, projects and labor service cooperation. It has 837 enterprises of 104 countries with a cumulative investment of US$7.1 billion, and is a famed tourism destination. In 2015, its gross imports and exports touched US$53 billion, besides overseas project contracts of US$3.3 billion. Outward investment was US$2.1 billion and foreign direct investment (FDI) utilized was US$3.3 billion. Manufacturing is a pillar industry, and in 2015 added industrial value was to the tune of US$65.3 billion. In keeping with the global trend, the proportion of service industry to GDP is 57 percent and increasing.

Kunshan - Gem of a Success

Small towns can at best be tourist attractions because of some niche interest – like being home to relics, traditions, practices or products which are not to be found in the big cities or are off the beaten path – is the general assumption. Kunshan, 55 kilometers from Shanghai to its east, and 35 kilometers from Suzhou to its west, defies such assumptions; as well as the norm.

Kunshan's success is owed to the opening up and reform, which saw it adopt a meticulously plotted path of comprehensive development. The how and what of it was presented with remarkable clarity and thoroughness by Mr. Zhang Yuelin, Deputy Secretary of Kunshan Municipal Committee of the Communist Party of China.

Zhang spelled out the process, stages and paths of development in catch-phrases that aptly captured the substance of what he wanted to impress upon the visitors. As he said, Kunshan went through five development stages, from farm to factory in the 1970s, local to global after Deng Xiaoping's southern tour in 1992, fragmentation to clustering after the Asian financial crisis of 1997, low to high value after the 16th CPC National Congress, and, big to strong after the 17th CPC National Congress.

However, Kunshan is now facing economic challenges. These include, according to Zhang, heavy dependence on exports, manufacturing being low on the value ladder, lack of innovation, tougher environmental standards, and resource constraints. He was confident of overcoming these.

Zhang said that Kunshan has turned the external pressure into a driver for economic transition, which would be realized through a six-year action plan, which he summed up as "one blueprint", "two platforms" and "three paths".

The story of Kunshan's many-faceted development, its achievements and how it plans to move ahead is attractively narrated in the Exhibition for Kunshan's Reform and Opening Up.

The dictum that man does not live by bread alone was perhaps recognized in these parts long before modern economic development took hold of our minds. This is evident in the many social, cultural and leisure diversions of Jiangsu in general and Nanjing in particular.

Nanjing, a city of mountains, waters and forests, known as the "ancient capital of six dynasties" and a "metropolis of 10 dynasties", is home to historical sites and relics. It is a renowned tourism destination with high quality holiday resorts. The city suffered the beastly atrocities of Japan's militarism – which millions of Japanese obviously feel is a crime against humanity. This is borne out by large numbers of Japanese visiting the Memorial Hall. In fact, many of the Japanese come solely to visit the Memorial.

Not far from this chilling site of history is the Oriental Metropolitan Museum with its priceless treasures of the ruling dynasties from the 3rd to the 6th century. Every object here is a delight to see, but the celadon pottery, figurines and funerary jars are unforgettable for their exquisite beauty of form and finish.


The author, an Indian journalist, is Senior Consultant and Editor of China-India Dialogue, published by CIPG.