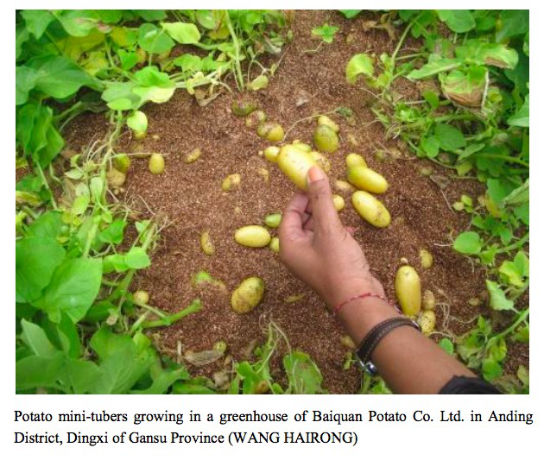 A pleasant spring rain moisturized the fields of Anding District of Dingxi, northwest China's Gansu Province on May 16. As raindrops patted on the roofs of greenhouses there, water trickled down the sloped roof forming a pool within the interior of the structures, in which potatoes are grown.

A Chinese poem says that spring rain is as precious as oil. For Dingxi, which lies in a semi-arid zone, that sprinkle is even more precious.

The potato is a major source of income for local residents. More than 55 percent of Anding District's 119,000 hectares of arable land is used to grow potatoes, which contribute 40 to 60 percent of the district's total annual income, according to Zhang Hongji, an official from the general office of the Anding District government.

Owing to its dry weather and infertile land, Dingxi has often struggled with poverty. Historical records show that in 1876, Zuo Zongtang, a court official of the Qing Dynasty (1644-1911), wrote to the emperor saying that the area was the poorest in the country. In 1982, the Food and Agricultural Organization rated Dingxi as unsuitable for human habitation. Now, Anding District (formerly known as Dingxi County) is still listed among the national-level 592 key poverty-stricken counties to be aided.

Local farmers have discovered that one way to get out of poverty is to switch to potato cultivation. The hardy crop's ability to survive cold weather, droughts and barren environments makes it perfect for the region, and high yields can be obtained. Now, Anding is one of the biggest potato producing areas in China.

Anding District has developed a complete chain of potato plantation and processing. The humble spud has successfully lifted many local residents out of poverty.

"In 2014, potatoes contributed an average of 2,100 yuan ($339) to the per capita net annual income of local residents," said Jia Junfeng, an official with Anding District's commerce department.

Last year, potato export revenue for the district reached $33 million, Jia said. Dingxi's potato and potato products have been sold across China and to countries such as the United States, Brazil, the United Arab Emirates and Kazakhstan.

Yang Lu, a middle-aged farmer in Daping Village of Anding District, has been growing potatoes for about 20 years.

"Before growing spuds, I used to plant wheat, peas and beans. Their yield was so low that the income was barely enough to keep the family clad and fed," he recalled.

Now Yang and his wife feed nine sheep and cultivate 1.5 hectare of land, on which they grow potatoes, maize and flax. Every year, they can harvest around 10 tons of potatoes.

Because of the use of virus-free potato seeds, the crop's unit yield has increased significantly over the years, which has in turn translated to higher income for the couple.

In 2005, the couple invested 70,000 yuan ($11,290) to build a new home. Their home, perched on a mountain slope that is more than 2,000 meters above sea level, enjoys a nice view of the surrounding terraced land. Their modified version of courtyard has a total indoor area of about 200 square meters.

The residence is equipped with household appliances such as a TV set and a fridge, as well as a set of European-style sofas that look out of place in the idyllic rural setting.

The couple also has access to tap water after the completion of the first-phase of a project to transfer water from Taohe River to central Gansu. Transferred water is enough for drinking, daily use and industrial production. Before that, local residents drank rainwater collected in cellars built in their yards.

Yang and his wife live by themselves because their daughter and son, both in their 30s, are working in nearby cities.

Daping Village has 564 people in 124 households. Many villagers have increased their income by growing potatoes and vegetables. Walking in the village, one can see several rows of new houses with pretty red tiles and some greenhouses planted with cucumbers, parsley and tomatoes.

"The district has approximately 1,000 greenhouses to grow virus-free potato mini-tubers," said Hu Hanmin, the deputy head of the district's seed management station who has more than 20 years of experience in potato seed cultivation.

Currently, because of poor seed quality, China's per-hectare potato yield is around 14,400 kg, whereas using virus-free potato seeds, per hectare yield can increase fourfold, according to experts.

Hu said that they have constantly improved the quality of virus-free potato seeds. Currently, the per-hectare potato yield in the district has increased to 45,000 kg.

According to Hu, it takes several steps to produce virus-free potato seeds. First, technicians take a tiny part from the tip of a potato sprout, which is usually virus free, and culture it in a test tube in clean laboratories. After this grows into a finger-long sprout, it will be planted into minced mineral powder in a greenhouse.

After half a year, mini-tubers (also known as G0 potatoes), each about the size of table tennis ball, can be harvested. These are the grandfathers of a seed potato.

Currently in Anding District, 17 companies funded by local residents engage in anti-virus potato seed production, such as Baiquan, Ailan and Kaikai. These companies altogether produce 500 million mini-tubers in a year, accounting for one quarter of China's total yield, Hu said. This makes Anding District one of the largest mini-tuber producers in the country, he added.

Hu said mini-tubers can generate a total of 200 million yuan ($32 million) of revenue for the district. Potato mini-tubers have been sold to domestic potato growing provinces and autonomous regions, such as Inner Mongolia, Heilongjiang and Xinjiang, and exported to potato growing countries.

About 4,500-5,000 mini-tubers are needed to sow 667 square meters of field, which can eventually produce potatoes for a field of 66,700 square meters after two generations, Hu said.

After farmers harvest potatoes grown from virus-free potato seeds, they keep some for food and seeds and sell the rest into market.

One third of Dingxi's potatoes are kept by farmers, one third are sold to market for fresh consumption and the remaining one third are processed into potato products such as modified starch, Hu said.

Gansu Jupeng Food Co. Ltd., founded in 1999, is a company that produces potatoes and processes fresh tubers into products such as chips. It also researches and develops new varieties of potatoes and potato products. The company covers an area of 36,000

square meters and hires 160 employees, including 12 executives and 26 technicians.

Inside the company's gigantic processing workshops, potatoes are transported on conveyor belts. Whole potatoes are first tossed and rinsed in water by machinery, and then peeled and shredded to produce chips and other products for fast food chains such as McDonald's.

In 2014, the company registered total sales of more than 90 million yuan ($14.5 million). It exported 12,000 tons of potatoes and potato products to countries such as the United States, the EU countries, the United Arab Emirates, Sudan and Amman, bringing in total export revenue exceeding $10 million.

The company, established in 2007, now occupies an area of 43,000 square meters, and employs 264 persons including 99 technicians holding undergraduate and postgraduate degrees. It has a modified starch research and development center and owns two patents.

The company is a leader in China's modified starch industry. In 2014, it realized total sales revenue of 500 million yuan ($80.6 million), said Dr. Tian Yingliang, the company's chairman of the Board of Directors.

The company's products have been exported to Canada, Malaysia, Singapore and Japan, and it aspires to further expand production and product lines, he said.

These potato processing companies have not only created jobs for local residents, but also benefited them by purchasing raw materials from them, which has boosted their income.

Now people in Anding are making their life better through potato plantation and making potato products, the production of traditional Chinese herbal medicine, and other poverty alleviation measures.

A brighter future is in sight, with the beginning of the second phase of the project to divert water from Taohe River to central Gansu, which will provide water for agricultural production. Additionally, the government is encouraging the consumption of potatoes as a staple food, which is expected to further spur potato production. After their cash crop is labeled a staple food, potato growers will enjoy even more policy incentives.