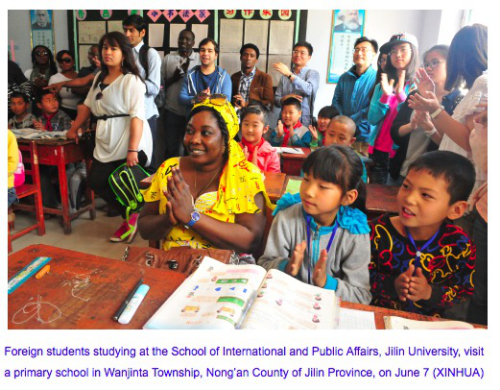 As summer progresses, the graduation season is getting into full swing. Jonio Da Anunciacao, a student from Timor-Leste is adding finishing touches to his master's thesis on eco-tourism development. As a student in the International MBA program in Beijing Normal University, he is to graduate at the end of this July.

The 28 students in his class came from 14 countries across Asia, Africa and Latin America. They started the program in the fall of 2014. Their tuition and living expenses are covered by scholarships offered by the Chinese Government.

In addition to studying China's economy, history, political development and other general courses such as statistics, the students were also given field trip opportunities.

In this April, Jonio and his classmates visited Yantian Village of Fenggang Town in south China's Guangdong Province and the nearby cities of Dongguan and Shenzhen to learn about the area's social and economic development. In May, they traveled to the cities of Lanzhou and Dingxi in northwest China's Gansu Province. The curriculum requirements include two field trips, one to an economically advanced area and one to a less-developed rural area so that students can gain a balanced and in-depth understanding of China's development.

After visiting greenhouses and agriculture-related industries in Gansu, Jonio was very impressed with the agricultural development taking place there that has lifted so many people out of poverty. "The land is not fertile, but people are very hard-working," he said.

They were enrolled in 775 educational organizations including institutes of higher learning and research institutes. Of the total, 43.6 percent were in degree programs, with 12.7 percent pursuing postgraduate degrees.

Most of the students were studying in large cities such as Beijing, Shanghai, Tianjin and in provinces with rich educational resources such as Jiangsu, Zhejiang, Guangdong, Liaoning, Shandong, Hubei, Heilongjiang and Fujian.

The report also showed that students from developed countries are inclined toward studying the Chinese language, while those from developing countries prefer to take degree courses in such fields as medical science and engineering.

Chen Zhiwen, Chief Editor of Eol.cn, also noted that growth in the number of foreign students from traditional source regions such as South Korea and the United States was weak, while growth in those from Africa and Europe was accelerating.

The Ministry of Education's survey showed that universities charge foreign students an average annual tuition of about 20,000 yuan ($3,226), 25,000 yuan ($4,032) and 32,000 yuan ($5,161) for bachelor's, master's and doctoral degree programs respectively. Of all the students, 9.8 percent were sponsored by a Chinese government scholarship.

In addition to making savings, many international students have chosen to study in China because they think that the experience in the country will make them more competitive in the job markets back home.

Jonio said that his proficiency in the Chinese language and his experience in China helped him land a job.

In 2006, then a college student in conflict-ridden East Timor, Jonio applied and received a scholarship to study in Beijing International Studies University, previously known as Beijing Second Foreign Language Institute.

He spent the first year in Beijing studying Chinese, and the ensuing four years majoring in tourism management. He and two other foreign students were placed into a regular class for Chinese students, where the courses were taught in Chinese. With help from local students, he overcame his language difficulties and received his bachelor's degree in 2011.

Originally, he chose to study tourism management because he saw many Chinese tourists in his country and he thought the degree would help him get a job in the tourist industry.

After returning to his country with the bachelor's degree, he found a job in the East Timor branch of a large Chinese company, where he worked from 2011 until 2013. Then he got an offer from an East Timor government department, through which he obtained a scholarship to study in the international MBA program in Beijing Normal University. Jonio said that he would go back to his country to start the new job after graduation.

It is not only individual students who would like to increase their competitiveness in the job market through foreign education, entire countries are also seeking to strengthen cooperation through educational exchanges.

On April 22, while addressing the Asian-African Summit held in Jakarta, Indonesia, Chinese President Xi Jinping announced that "in the next five years, China will offer 100,000 training opportunities for candidates from developing countries in Asia and Africa and host the annual Asia-Africa Youth Festival, inviting a total of 2,000 Asian and African youths to China."

During the China-Latin American and Caribbean Countries Leaders (CELAC) Meeting held in Brasilia, capital of Brazil, on July 18, 2014, Xi announced that, "China has started to work on the provision of 6,000 government scholarships and 6,000 training opportunities to CELAC members in the coming five years."

The foundation was set up in response to U.S. President Barack Obama's call, made in 2009 during his first visit to China, for 100,000 Americans to study in China by the end of 2014. The foundation's mission is to strengthen Sino-U.S. relations and ensure that the next generation of Americans are equipped to engage effectively with China.

In 2013, the UK launched Generation UK-China, a British Council program which aims to send 80,000 British students to study or intern in China by 2020. The British Council said that experience in China is an excellent investment in a student's future.

According to a press release by the British Government dated May 27, 2014 that echoed comments made by British former secretary of state for business, skills and innovation Vince Cable, the global center of gravity is shifting eastward to major economic powerhouses like China. Citing new independent research showing that a lack of skills in languages including Chinese in the UK is costing the economy about ?48 billion, he said, "I don't want young British people to get left behind."

To facilitate educational exchanges, China has signed degree and diploma recognition agreements with 41 countries and regions that would allow qualifications and awards to be valid in both countries.

Chinese universities are launching more programs for foreign students. Shanghai Summer School, launched in 2008 in more than 10 universities across the city, offers summer courses on Chinese language and Chinese culture from June to August. This summer, Shanghai Summer School is going to start a new program to attract 20 students from countries lying along the Silk Road Economic Belt and the 21st-Century Maritime Silk Road.

He said that providing more scholarships while lowering admission thresholds will only serve to attract students of a lower caliber.