Forty years ago, China entered a new development stage when the country launched the reform and opening-up drive. Since then, it has made tremendous achievements and gained valuable experience, a review of which will illuminate the future.
Important experience The impressive achievements can be attributed mainly to the following factors. First, there is the influence of historical and cultural factors. The term "path dependence" suggests that certain cultures and histories lead to certain development outcomes despite twists and turns along the way. For instance, for a fairly long period before the Opium Wars of the mid-19th century, China's economic development was at the forefront of the world. In terms of comparable GDP, it ranked first in the world, with a peak level accounting for more than 30 percent of the global GDP. Shortly before the founding of the People's Republic of China in 1949, its share of the global GDP plummeted to only about 4 percent, while now the share has risen to about 15 percent. China is blessed with a rich historical and cultural heritage, most of which has played a positive role in promoting its development. Second, China has created a unique development path suited to its national conditions. Although China has learned a great deal from the West, it has not completely imitated a Western development model, rather, it has chosen a socialist path with Chinese characteristics. It has not adopted the check-and-balance model that divides government into legislative, executive and judiciary branches. Instead it follows a model under which the leadership of the Communist Party of China is upheld, the people are the masters of the country and the country is ruled by law. Third, China has implemented market-oriented reform. From its inception, China's reform has given full play to the role of the market. Adhering to market orientation was crucial for the success of reform. Fourth, the opening-up process has promoted integration with the rest of the world. In the past four decades, China has participated in the globalization process. So far, its opening up has gone through four stages. The first stage started in 1979 when special economic zones were built to attract foreign direct investment. Jobs were created and the products made in these zones were mainly for export to bring in foreign currency. The second stage was the period from China's accession to the World Trade Organization in 2001 to 2012. During this period it accomplished two missions: bringing its foreign trade and investment into compliance with international rules, primarily those of developed Western countries, and splicing itself with the international value chain. The first enabled the nation to be more accepted by the world at large, and the second made it an indispensable part of the global industrial and value chains. The third stage arrived with the vigorous development of pilot free trade zones (FTZs). Such areas were built in Shanghai in 2013; Guangdong, Tianjin and Fujian in 2015; Zhejiang, Henan, Sichuan, Shaanxi, Hubei, Chongqing and Liaoning in 2017; and Hainan in 2018. So far, China has established 12 FTZs, creating a favorable business environment in terms of tariffs, regulatory supervision and other aspects, and promoting international trade and investment. China's opening up entered the fourth stage in 2013, marked by the nation's proposal to jointly build a Silk Road Economic Belt and a 21st-Century Maritime Silk Road. Through the Belt and Road Initiative, China hopes to bring into full play its advantages in terms of funds, certain technologies and human resources to advance the interconnectivity of facilities, trade, investment and finance and people-to-people exchanges for a community with a shared future for humanity. Fifth, the country has given top priority to economic work. Since 1978, the focus of the Party and government's work has shifted from politics to developing the economy. Party organizations and governments at all levels as well as the general public have placed great importance on economic work. Sixth, China has maintained political and social stability. The Chinese people firmly believe that nothing can be accomplished without a stable society. So the country has given great attention to political stability. My studies on the economic development of countries along the Belt and Road found that political turbulence has been a direct cause of economic backwardness in some of these countries. Seventh, the government has encouraged market competition. Without competition, there will be no prosperity. China has a competitive environment. At the individual level, competition for university admission, business opportunities or civil service jobs is fierce. At the collective level, enterprises are competing against each other and so are local governments. Some institutional arrangements have been born out of competition. Eighth, China has given priority to education, a traditional value. Education bolsters China's development. Basic education in China is doing well, and higher education has also developed rapidly. Ninth, China has formulated and implemented development plans. Planning is a Chinese tradition and strength. The work of the Party and government is planned, and so is the work of various other social sectors. Planning with Chinese characteristics has been institutionalized. On the basis of careful research, planning and implementation can foster consensus and pool social efforts to eventually reach goals. Tenth, the Chinese people are extremely diligent. I think this is the most important factor because without hard work and dedication, all the planning and policies are empty talk. 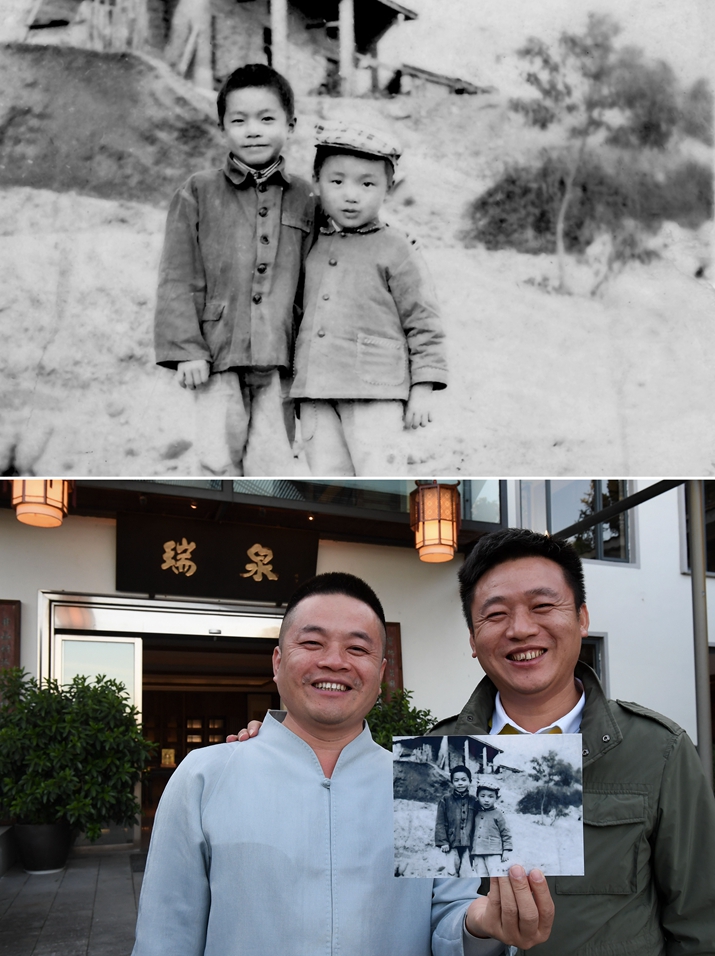 Huang Zhenghui (left) and his younger brother Huang Shengliang pose before their home in Wuyishan, southeast China's Fujian Province, in 1980 (above) and in 2018. The four decades of reform and opening up have greatly improved Chinese people's living standards

The success of reform and opening up also lies in the step-by-step approach. At the inception, reform was largely by trial and error, with no clear standard to measure whether it was successful. The initial standard was utilitarian. As Deng famously said, "It doesn't matter if a cat is black or white, so long as it catches mice." In the early 1990s, the reform goals became clearer: to enhance productivity, make the country prosperous and strong and raise people's living standard.

The rural household contract system with remuneration linked to output began from an experiment in Xiaogang Village in east China's Anhui Province. After land was contracted to individual households, grain yield improved significantly. It was then that the government promulgated policies to promote practice.

An important lesson learned during the past 40 years is that the speed of reform must be managed well. For instance, if the capital market had been opened before regulatory measures were put in place, it may have led to a financial crisis.

Contribution to the world

China's reform and opening up has international significance in mainly two aspects. As a result of reform and opening up, China's economic strength has been greatly enhanced so that China can provide more and better public goods and public services to the world and make an important contribution to global economic growth and world peace. In recent years, China's average annual contribution to the world economic growth has remained at over 30 percent.

In the five years since the launch of the Belt and Road Initiative, China has invested a large amount of money in building infrastructure in various parts of the world. This includes a railway in Tajikistan, tunnels in Uzbekistan, a power station in Pakistan, a railway in Laos, a high-speed railway in Indonesia and Thailand, ports in Myanmar and Sri Lanka, industrial parks in Belarus and roads and railways in Africa.

In addition, China has carried out international production capacity cooperation with some foreign countries and established industrial parks in many countries, promoting the industrialization process of some developing countries. This has provided new employment opportunities and generated tax revenues.

Another example is that every year, China imports about $2 trillion worth of goods and $500 billion worth of services from all over the world. China has become a huge market for goods and services from other countries. In recent years, China's outbound investment has exceeded its inbound investment and become a very important net exporter of capital in the world. China also initiated the establishment of the Asian Infrastructure Investment Bank and the New Development Bank of BRICS countries, which have provided construction funds for some underdeveloped countries.

As China's economic strength grows, it has begun to make greater contributions to improving global governance. By 2019, China will become the second largest contributor to the UN membership fees. China, as a permanent member of the UN Security Council, has participated in the largest number of peacekeeping missions among the council's five permanent member states.