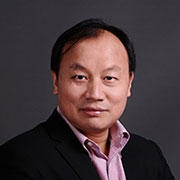 He is now the Dean of Emerging Markets Institute (EMI) as well as theDirector of the Belt and Road Research Institute (BRRI) of Beijing Normal University, a professor of Economics of the University. Before his professorship, he was the chief China economist of SG Securities Asia, as well as the chief representative of the company in Beijing for four years;He also worked with the World Bank as a China economist for three years in 1990s. He used to teach Development Economics in the Chinese Academy of Social Sciences as a professor of the Graduate School of the Academy.

His works won twice (in 1994 and 2006 respectively) Sun Yefang Economic Prize which is the highest economics research award in China, and he also won Zhang Peigang Development Economics Award in 2008.

He received his Doctorate of Economics from the School of Economics and Management, Witten/Herdecke University in Germany, Master of Science degree jointly by University of Dortmund in Germany and Asian Institute of Technology in Bangkok Thailand, and he also conducted a two and half years post-doc research program in the Kennedy School of Government of Harvard University.

His main academic interests are development economics, the emerging market economies, the Belt and Road economics, urbanization and rural development.