Should we be afraid of robotics?

Editor's note: Djoomart Otorbaev is the former prime minister of the Kyrgyz Republic, a distinguished professor of the Belt and Road School of Beijing Normal University, and a member of Nizami Ganjavi International Center. The article reflects the author's views and not necessarily those of CGTN. 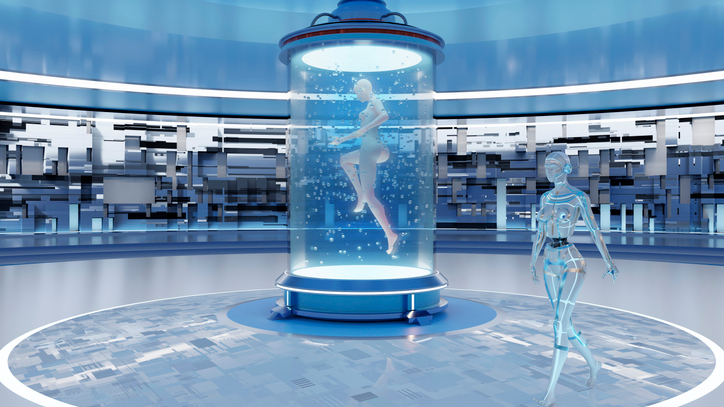 The U.S. military is concerned about the rapid development of China's space capabilities, especially a satellite equipped with a robotic arm that can approach an enemy satellite and disable it.

"Beijing is actively pursuing space supremacy through space and space attack systems," Commander of the U.S. Space Command General James Dickinson wrote in prepared remarks to the Senate Armed Services Committee earlier this month. Space-based robotic arm technology could be used in a future system to counter other satellites. "One notable object is Shijian-17, a Chinese satellite with a robotic arm," he said. The arm, which can reach 15 meters in length, would be attached to the main module of the Tiangong space station and can lift objects weighing up to 20 tons.
The potential for the rapid destruction of satellites is of great importance in future wars. Some believe that decisive events in planned battles can be resolved in the first seconds of the conflict when each side tries to disable the enemy's communications equipment based on the Global Positioning System (GPS). That's because all actions of the enemy armed forces to coordinate aircraft carriers, fighters, tanks, and missiles rely on GPS resources to determine the location and navigation of targets. And if communication is lost, all the capabilities of the parties in combat conditions would become useless.
Dickinson called China a "cutting-edge challenge" in space, with more than 400 satellites in orbit, second only to the United States. Meanwhile, Russia has about 200 satellites but could double that number by 2030.
However, Chinese officials have said that the U.S. military is entirely unfair in criticizing what has become a standard space technology. For example, the currently operating International Space Station (ISS) has a robotic arm, which reaches 17 meters and has been used for construction and repairs for many years. For example, NASA first launched a spacecraft with a robotic arm back in the 1990s. Chinese officials have clarified that a robotic arm on the new space station will grab an approaching spacecraft to aid docking. Another robotic arm is designed to locate and remove hazardous debris from the Earth's orbit.
In an official document from 2016, Beijing stated that combating space debris, including its integrated monitoring, early warning, and emergency response, will be one of the top ten challenges for the next five years of space industry development. Since then, several methods for cleaning up space debris have been developed and tested, from collecting it with robots and nets to destroying it with lasers. Not only China but also NASA, the European Space Agency, and the Japan Aerospace Exploration Agency have announced debris removal projects and launched several experimental spacecraft for this purpose.
Such political statements about the importance of robotics applications in space attract attention and stimulate analysis of this critical area of modern industry. But what is happening globally in this high-tech area? 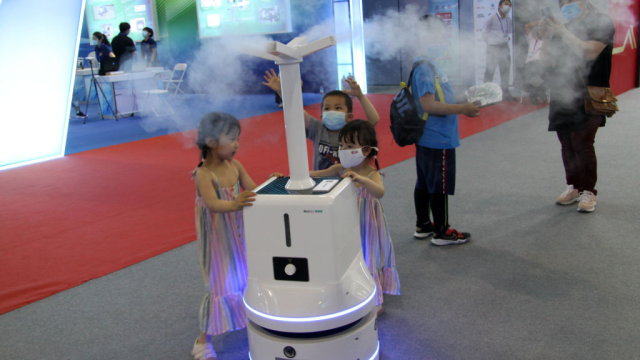 ▲ A disinfection robot at the scene of the National Science and Technology Week in 2021 and Beijing Science and Technology Week, Beijing, China, May 22, 2021. /Getty
After six years of production growth, robotic device installations fell 12 percent in 2019 to 373,240 units with a volume excluding software and peripherals of $13.8 billion. The drop in production reflected the hard times experienced by the two major installation industries – automotive and electrical – associated with the trade conflict between China and the United States. In 2019, installations in China reached 140,492 units, which is more than the number of facilities produced in Europe and America combined. The U.S. general's remarks probably reflect not specifically China's military achievements but the overall leadership it has achieved in robotics.
China's industry in that area is large but it still has significant room for development. The Chinese government announced the priority of robotics development in its document "Made in China 2025." This indicates that the robotics industry, along with artificial intelligence and automation, is one of the priority sectors for high-tech development, contributing to the transformation and modernization of modern industry.
The government supports companies adopting robotics-assisted automation in critical industries to achieve these goals, including automotive, electronics, home appliances, and logistics. Several programs and incentives encourage research and innovation, such as subsidies to robot manufacturers and automation businesses, low-interest loans, tax breaks, and land lease incentives.
While the U.S. is suspicious of robotics development in China, others, including European and Japanese companies, decided to actively invest in China, understanding the prospects for the country's growth. In September 2019, the Swiss-Swedish multinational ABB began the construction of a state-of-the-art factory near Shanghai. According to their press release, "It will be the most modern, automated and flexible plant in the robotics industry worldwide – the hub where robots make robots. The new plant will also house a research and development center that will help accelerate innovation in artificial intelligence."
ABB, which calls itself the "No.1 robotics manufacturer in China," describes the plant, which is scheduled to open next year, as "an important investment in the company's global growth in the world's largest robotics market." Japanese industrial robot manufacturers Fanuc, Yaskawa Electric, and Kawasaki Heavy Industries have also decided to significantly expand their operations in China over the next three years.
The development of robotics is an inevitable phenomenon in the modern world. It is also possible to develop dual-use technologies for use in both civil and military purposes. The essential task for politicians and diplomats is to build trust between the world's major powers so that peaceful competition in high technologies does not increase the risks of intentional or accidental military conflicts. We must not forget that such risks are growing every day.